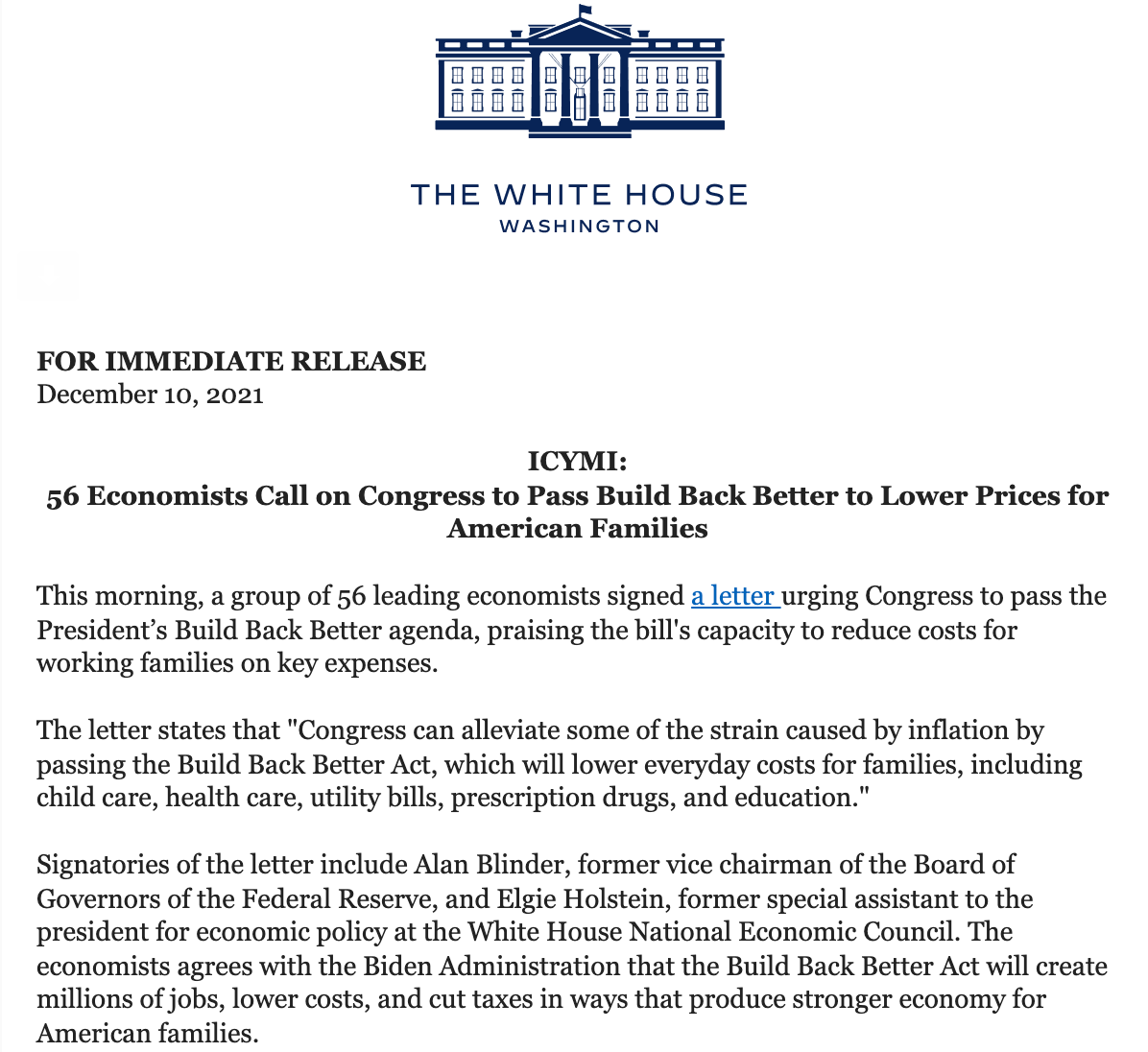 This morning, 56 of America’s top economists released a letter saying, “Congress can alleviate some of the strain caused by inflation by passing the Build Back Better Act, which will lower everyday costs for families, including child care, health care, utility bills, prescription drugs, and education.

The challenges facing Americans today are not unique to our country – the pandemic has created bottlenecks and economic disruptions across the globe, but just as 50 economists said today, the Build Back Better Act will work to alleviate the strains families are feeling from inflation over the long term.

With inflation numbers expected to come out hot this morning, a group of 56 economists says President Biden’s Build Back Better Act would counteract the impact of rising prices on Americans’ wallets.

Driving the news: The economists signed a letter, released this morning in conjunction with left-leaning advocacy group Invest in America Action, urging Congress to pass the social spending plan swiftly, in order to get the ball rolling on programs that will lower costs for essentials like child care, health care and education.

Notable signatories include Alan Blinder, former vice chairman of the Board of Governors of the Federal Reserve, and Elgie Holstein, former special assistant to the president for economic policy at the White House National Economic Council.

Over 50 economists have signed on to a new letter calling on Congress to “swiftly” pass President Biden’s sweeping climate and social policy bill, arguing that it would alleviate some of the pressures of inflation by lowering healthcare and other costs for families.

The signatories of the letter include Alan Blinder, who served as vice chairman of the Federal Reserve in the 1990s, and Elgie Holstein, senior director for strategic planning at the Environmental Defense Fund and a former economic adviser in the Clinton White House.

“Congress can alleviate some of the strain caused by inflation by passing the Build Back Better Act, which will lower everyday costs for families, including child care, health care, utility bills, prescription drugs, and education,” states the letter, a copy of which was obtained by The Hill ahead of its release. “These investments, combined with the Build Back Better Act’s tax credits for the middle class, will help allow families to keep more money in their pockets.”

“Overall, the Build Back Better Act will foster a more equitable, sustainable economy by creating millions of jobs, lowering costs, and cutting taxes for American families. We urge Congress to swiftly pass this critical legislation into law,” the letter continues.

The letter was organized by Invest in America Action, a liberal group that has advocated for the passage of Biden’s full domestic agenda.

Dozens of economists are touting the benefits of President Joe Biden’s proposed Build Back Better Act despite Republicans, and some moderate Democrats, continuing to raise concerns about how it could affect inflation.

[…] “Congress can alleviate some of the strain caused by inflation by passing the Build Back Better Act, which will lower everyday costs for families, including child care, health care, utility bills, prescription drugs, and education,” the economists wrote in the statement, which was emailed to Newsweek.